Nakoro is a 100% owned VMS (volcanic massive sulphide) prospect is located in Fiji with anomalous copper and zinc intercepts from historical drilling with recently discovered surface expressions, and mineralization that is open at depth and along strike. The prospect sits within an 8 km untested prospective geologic horizon highlighted through the interpretation of regional magnetics. Nakoro is hosted within the same geologic units as Thunderstruck’s highly prospective Korokayiu VMS prospect.

The Nakoro VMS prospect is located on the southern part of Fiji’s largest island, Viti Levu, and is approximately 50 km east south east of Nadi. The prospect sits within Special Prospecting License No. 1425 and, along with landowner agreements, has been renewed for 5 years, the maximum allowed under Fijian exploration policy. The Nakoro prospect is part of a 148 km2 property, located 50 km south of the Vatukoula gold mine, which has produced 7 million ounces of gold . 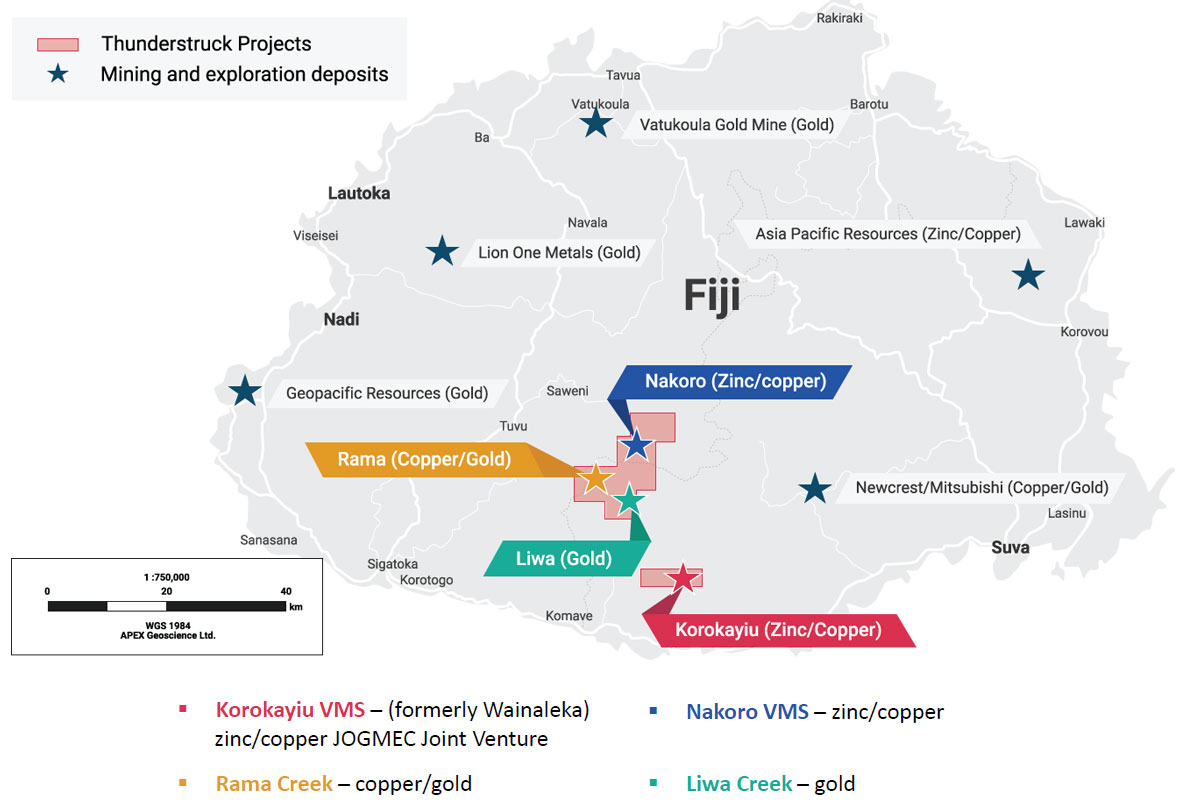 The Nakoro VMS prospect was initially highlighted by country wide stream sediment sampling programmes undertaken by Barringer Fiji Ltd. (Barringer) In the 1960’s. Barringer entered a joint venture with Australian Anglo American Ltd. (Anglo) in 1974 who carried out two drill campaigns in 1975 and 1977. High grade zinc intercepts from Anglo include 12 m of 12.7 % zinc, 7.4 m of 7.2 % zinc and 23.2 m of 5.1 % zinc1. After laying untouched for years VMS exploration was revived on the property in 2006 with surface sampling aimed at discovering surface expressions of high-grade historic drill intersections. Recent work includes anomalous near surface shallow “back pack” drill intercepts of zinc, copper and gold.

Geologically, Viti Levu has been exposed to a complexity of crustal plate rotations and has been dominated by island arc development followed by rifting, like that of neighboring Pacific Rim countries. Magmatism, precious, and base metal emplacement occurred episodically thought out the evolution of the Fijian platform. The oldest know mineral occurrences were emplaced within low-k tholeiitic volcanics of the Wainimala Group, host to the Nakoro and Korokayiu VMS prospects, both proximal to the major intrusive Colo Plutonic Suite.

The Nakoro prospect area contains numerous limonitic gossans over a strike length of 700 m. Below the gossans is intense silicification along with phyllic and argillic alteration, as suggested Anglos drilling. Historic drilling has shown the zone to strike north east, like gossans, with an interpreted dip angle of 10o to the south east. Mineralization occurs as massive sulphides, sulphide rich veinlets and within silificied rocks as sulphide disseminations. Common minerals include pyrite, sphalerite, barite, chalcopyrite, bornite and covellite with minor galena and tetrahedrite-tennanite. Historic drilling intersected a massive sulphide zone to a depth of approximately 125 m, with an average width of 7m, over a strike length of some 300m. Mineralization is open in all directions.

The exploration potential for VMS deposits is being demonstrated through current exploration work on Thunderstrucks Korokayiu deposit. The Nakoro VMS prospect, like Korokayiu, is hosted within the Wainamala Group, has historical high-grade intercepts of copper and zinc, and recent work detailing near surface anomalous copper and zinc values. The targets highlighted at Nakoro warrant further exploration through modernized, higher resolution techniques and drilling of high grade zones to expand the known extent of mineralization.

1Drill intercepts are considered historic and are not Ni 43-101 compliant nor have they been verified.