Twitter
October 11, 2019 – Vancouver, British Columbia – Thunderstruck Resources Ltd. (AWE.TSXV; THURF.OTC) (The “Company”) is pleased to announce that it has received the results of a recently completed M.Sc. academic study completed on the Liwa Creek gold prospect. In addition to this Master’s thesis, an additional 29 surface rock geochemical samples were collected by the Company.

The principal conclusions of the Liwa study indicate the Liwa Creek gold prospect shows characteristics of both high- and intermediate-sulphidation epithermal deposits. It is likely that the prospect represents a transitional zone between the two styles: an older, high-sulphidation style persevered along ridges at higher elevation and an intermediate-sulphidation style interpreted to be younger, expressed on the peripheries of hydrothermal breccias as in the well-documented, high-grade gold- and base-metal-rich veins occurring at the Jensen’s Showing.

Significantly, open-space veining and silicic alteration at higher elevations are interpreted to indicate that current exposure lies close to the paleo water table and has seen relatively little erosion, indicating that considerable potential exists in structures open along strike and at depth.

Mineralisation is controlled by northeast-trending fault zones and is spatially related to kaolinite-poor argillic alteration present in two forms: 1) Thin, base metal sulphide-silver veins; 2) Two-stage breccias with acid argillic altered cores and argillically altered peripheries that host gold mineralisation in the form of electrum. Both of these remain open at depth and along strike.

Additional prospecting within the Liwa Ridge area has also returned the highest gold assay to date from this showing, from a large 50 cm boulder of colloform banded quartz veined altered volcanic rock. Two separate samples from the large boulder located on the top of Liwa Ridge, which is interpreted to be nearly in place, returned assays of 11.1 g/t Au and 8.5 g/t Au, in addition to 27 g/t Ag and 109 g/t Ag.


The results are considered highly significant and validate Thunderstruck’s systematic exploration strategy of ridge-and-spur soil geochemical sampling within structurally favourable target areas. Follow-up prospecting at the Lower Vatuvatulevu anomaly has returned some of the highest gold, and currently the highest silver assays returned to date within the Liwa Creek Prospect.

“We continue to receive very encouraging early-stage results from our Liwa Creek gold prospect, and are looking forward to drilling it,” notes Bryce Bradley, Thunderstruck CEO. “While exploration on our Korokayiu zinc/copper project, joint-ventured with JOGMEC, continues apace, we are also actively working to advance our other exciting prospects, most notably Liwa Creek. These latest high-grade results support our very positive view of Liwa’s prospectivity.”

Viti Levu, the main island of Fiji, has a long mining history. It is on the prolific Pacific Ring of Fire, a trend that has produced numerous large deposits, including Porgera, Lihir and Grasberg. The island of Viti Levu hosts Namosi, held by a joint venture between Newcrest and Mitsubishi. Newcrest published Proven and Probable Reserves for Namosi of 1.3 billion tonnes at 0.37% Cu and 0.12 g/t Au (5.2M ounces Au and 4.9M tonnes Cu). Namosi is now undergoing environmental assessment as part of the permitting process. Lion One Metals is now developing its Tuvatu Project, with Indicated Resources of 1.1 million tonnes at 8.17 g/t Au (294,000 ounces Au), and Inferred Resources of 1.3 million tonnes at 10.6 g/t Au (445,000 ounces Au). The Vatukoula Gold Mine has been operating for 80 years, producing in excess of 7 million ounces.

Thunderstruck Resources is a Canadian mineral exploration company that has assembled extensive and highly prospective properties in Fiji on which recent and previous exploration has confirmed zinc, copper and precious metals mineralization. The Liwa Creek gold prospect and Rama Creek copper/gold porphyry are two of the Company’s four distinct projects. The Company provides investors with exposure to a diverse portfolio of exploration stage projects with potential for zinc, copper, gold and silver in a politically safe and stable jurisdiction. Thunderstruck trades on the Toronto Venture Exchange (TSX-V) under the symbol “AWE” and United States OTC under the symbol “THURF.” 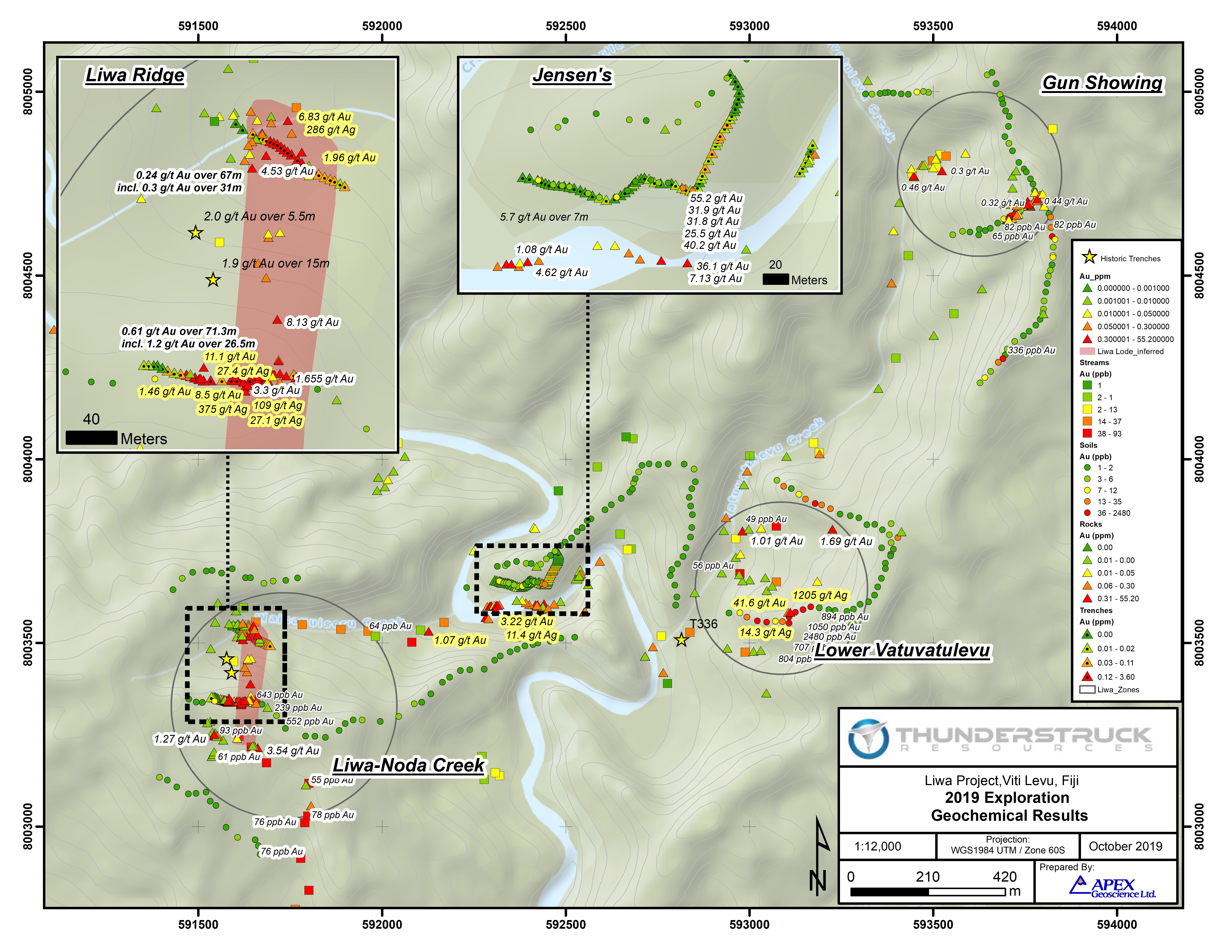 Kristopher J. Raffle, P.Geo. (BC) Principal and Consultant of APEX Geoscience Ltd. of Edmonton, AB, is a qualified person for the project as defined by National Instrument NI 43-101. Mr. Raffle has reviewed and approved the portion of the technical content of this news release as it relates to the Liwa Creek Prospect. During 2019 all stream sediment samples were submitted to Australian Laboratory Services Pty. Ltd (ALS) labs Perth for 30g gold Fire-Assay analysis and multi-element geochemistry by four-acid ICP-MS. Given the reconnaissance nature of the samples, Thunderstruck has relied on the external QA/QC of ALS which included the insertion of standard, blank and duplicate samples at a rate of 10% into the sample stream to confirm the accuracy of the reported results. ALS is independent of Thunderstruck and the QP.

For additional information, please contact:
Rob Christl, Investor Relations
Email: This email address is being protected from spambots. You need JavaScript enabled to view it.
P: 778 840-7180
or, visit our website: http://www.thunderstruck.ca